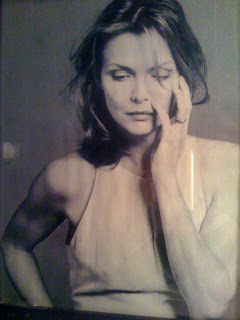 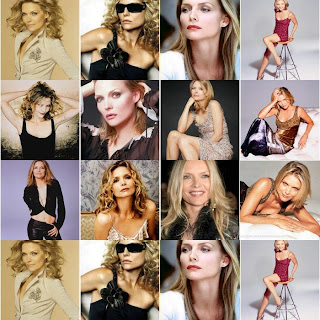 When my parents and I first moved to the U.S. from Greece (we moved to Chicago) I was about six years old. I remember being fascinated by American movies. I watched as many as possible, all kinds; comedies, dramas, western, musicals, it didn't matter if it was old or current---I couldn't get enough. Movies taught me so much, good & not so good. I was the perfect audience, even today, the minute the lights go down in the movie theater I am a captive audience and I am willing to suspend my current reality and buy into the one the director has in mind. Movie stars, especially the ones that could act, were fascinating. The real ones could hold your attention without saying a thing. Just standing there on screen they would be captivating and it was more than just looks. As I got older and Hollywood began to change, like everything does, it seemed that there were fewer and fewer movie stars...then there's Michelle Pfeiffer. The first time I was made aware of her existence was an early morning in Chicago 1982. "Good Morning America" was on in the background and she was about to be interviewed for her part in "Grease 2." I saw her in passing on our TV as I was getting ready for school. I stopped, watched the whole interview and was instantly intrigued. I don't think it was exactly what she was talking about, after all she was promoting "Grease 2" a fine movie that I still watch to this day whenever I happen upon it...but it's "Grease 2." It wasn't enough that she was drop dead gorgeous, Movie Stars are supposed to be. There was something else, something that you can't teach or acquire. She was and is a Movie Star. I am not going to bore you or further embarrass myself by recounting personal Michelle Pfeiffer stories since that day, but it's safe to say that for me...she is captivating, even when she's not saying a word.
Posted by angelo at 9:23 PM

Intriguing! Michelle is by far one of the beauties to me and has always been...her look is so amazing and there is something about her that is captivating! I remember travelling to Greece when I was a flight attendant...it was a dream come true for me as it's the only place in the world I had always wanted to go to. I remember standing on the balcony of our hotel looking out to the Acropolis (sp?) and crying...I loved the country and my dream is to go back and really visit, Santorini and all the smaller islands~~~one day I will hopefully go back and relish in it's beauty and history!

Hah! I love Grease2 also, and can sing all the songs!
Found your site via Penny @ Always Something!
I really enjoy both of your HGTV shows, but it's really 12 Hour Design, you know.LOL
I also loved the show you did where you brought Debbie Matenopolous's style to a different family. I'm Greek, too!

Have you met her? If you could say one thing to her, what would it be?

I have NOT met her (though I have been in the same store at the same-twice) and I don't know what that one thing would be. There's so much, but I think her talent and the way she's worked so hard to focus on the craft of her work rather than the obvious, her beauty.

It's too bad you didn't take your chance. She would have probably appreciated it. Have you been approached in your daily life by your fans? What's it like? I don't think i would like the fame part of what you do, people thinking they know you, etc. How do you deal?

The fame thing is odd, for lack of a better word, but people have been very nice in their interactions with me. I am very lucky.