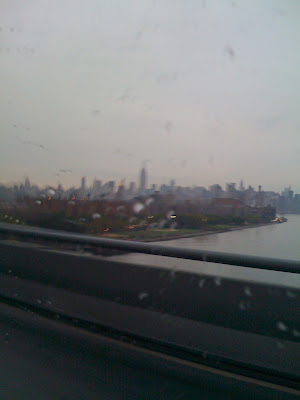 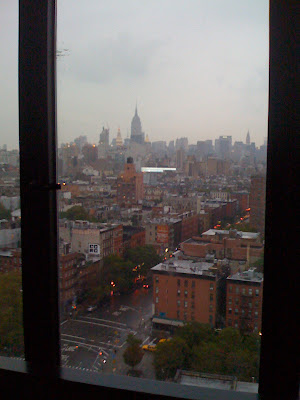 I was only in New York for 3 days and all of them were filled with an HGTV Holiday Shoot so I didn't really get to have much alone time with my secret affair--NYC.
It was raining when I landed at JFK.  The ride over the bridge into Manhattan is one of my favorite journeys.  I cannot count the number of times I have done that same exact ride.  I'm sure it has been hundreds and each trip across the bridge feels like it's filled with different and new possibilities.
The above views are from the window of my cab and the view from my hotel once I checked in.  I was exhausted by the time I arrived, but one look out my hotel window and I suddenly had a new found surge of energy and the only thing that was going to satisfy it was a walk in the rain through the streets of my temporary neighborhood (lower east side).  I grabbed a coffee on the corner, grabbed a slice of pepperoni pizza across the street and I was on my way.  I had no idea where I was going to go, but that didn't matter.  I was in New York and I have lived in L.A. for so long that my need to walk in a city where I didn't feel like the lone wolf out on the streets was so great, that a plan wasn't on the itinerary.  There were others out there as well and they too were walking.  These were my people...talking, laughing, making plans, yelling at cars going by, getting into cabs and sneaking underground to the next stop for what I was sure was an incredibly exciting and way too hip and smart evening.
Taking in all the neighborhood visuals and the smells that seem to change from block to block felt euphoric.
I have been in L.A. for over 15 years and every time I go to New York I feel right at home from the moment my very anxious feet hit the ground...I've given up waiting to feel that in L.A.  Don't get me wrong, I have grown to appreciate Los Angeles, but I always wind up having a fulfilling NYC affair that L.A. could never match.  Don't tell L.A.  It thinks we're on a break.
-angelo surmelis
Posted by angelo at 10:42 PM

Email ThisBlogThis!Share to TwitterShare to FacebookShare to Pinterest
Labels: nyc

That's way deep. And I know what you mean. When I was 16 my family and I went to Vegas. It was the first time that I would ever see the Rocky Mountains. The beauty was something I can't put into words. I just felt really connect to Earth out there. So when I got back home to Kansas City, it just wasn't the same. Going back to the daily grind was hard. I mean, home is home. But to see all that space and beauty only to be crammed back in the city drove me nuts.

I have only been to NY one time but I know how easily I could fall in love with this place I am dying to go back and take hubby with me;) because he has never been! French;)

Angelo,
Great site. Very informative. Since you are in the interior design community I would like to offer your readers some more information in design. You can visit our sites by clicking the links below. I hope this helps your design readers. Flooring
Green Flooring

This is the time of year I get homesick for my adopted hometown of Richmond, VA. There's a crispness in the evenings that encourages walking around the neighborhood (the Fan) and checking out all the scenery. Driving becomes a joy because all of the tree-lined streets and sprawling, not too distant, country side are flush with the autumn colors. The change of seasons is the thing I miss most about living in L.A.

Glad you were able make it back to New York. Hope your break was as restorative as it was pleasurable!