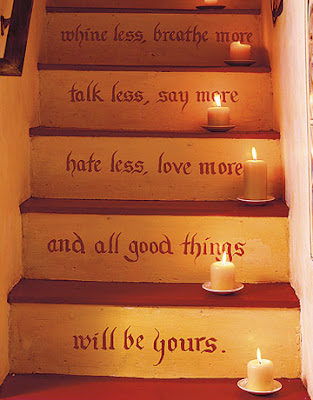 Thank you all for making 2008 a pretty incredible year!
To all the RMS people that have been with the HGTV site since the beginning and that are a huge part of why the show exists, the new "design geeks" I have met, the incredible homeowner's that have generously opened their home to me and my crew, the inspirational RMSers that post and are brave enough to be on TV with us and to my incredible crew (on-camera & behind the scenes) that make the show happen week after week and still have great attitudes.  I have to list them because they rock!
Tara, Jennifer & Scott-the big cheeses behind all my work with HGTV & the nicest people you'll ever meet.  I am blessed to work with them.
Kim-my supervising producer who cares more than I can ever describe AND she works too  much.
Michael-THE MAN responsible for me being at HG.  A kinder, wiser, more genuine TV exec you'd be hard pressed to find.
Loren-our executive over at HG who tweaks, nudges and molds our show to be the best it can be.
James-our executive over at HG that got the ball rolling and "saw the vision."
Jake-my director and main guy that I really would not do the show without.  NO, REALLY.  Plus, he's a mean BBQer.
Robyn-my other producer that just makes me laugh.  She is funny, talented, lovely, I could go on but it'll go to her head.
Katie-she is an absolute dream to work with..if you don't believe me, ask her.  "How Daaaare You!"
Dan-I know he works hard (another one of my producers), but it's difficult to feel for him when he's in NYC one week and Hawaii the next "shooting" our inspirational homeowner's and then going out to dinner with them while I'm in the deep San Fernando Valley with no air conditioning.  What gives?!  (I'm not bitter)
Julia-segment producer who is just beyond lovely to work with AND funny.
Jared-the man, the myth the legend.  I couldn't ask for a better TV partner.
Ellen-somehow manages to make the show sound fresh week after week.
Susie-for being brilliantly talented and incredibly sweet.  That is not a common combo.
Jen & Ruth-Honestly...these two are superstars all on their own, but together they make for one superhuman, unexplainable, force of nature design producer that I could not live without and I WON'T!  They know what I want before I have the chance to tell them and they produce miracles.
Danny, Jason, Rupert, Ron, Jacob, Vic & Pahl-this team of carpenters, painters and craftsmen have made my dreams come true under unbelievable time and budget restrictions and they still like me---I THINK.  Note to self, don't be the first to drink the champagne.
Jeremy-I would NOT want his job.  He has to find our homeowner's.  It's not as easy as it seems.  Trust me.
John-No one has taken more knocks than John.  He's our go-to guy for everything including food.  We've worn him down and he takes it well.  I can't imagine doing this show without his witty repartee.
John, the editing & sound staff-these people are MAGICIANS!  They get 10's of hours of raw footage and make it into a 22min show, plus they have to look & listen to my big fat head everyday and try to get it to make sense.  BIG JOB.
Kris-for creating sewing miracles.  I really think she has Cinderella's mice in her house somewhere.  Genius.
Ivana-she has logged more car miles than all the rest of the team combined.  She has the pleasure of picking up or arranging delivery of all the stuff I buy...ALL OVER Southern California.  Good Times.
Brandon-our newest edition to the staff and already doing an amazing job AND he fits right in with all the other crazies.
AND...to ALL the camera, sound guys & make-up ladies (there's a constant rotating crew) that work on our show, you kids are the BEST & make me look as good as possible and that's tall order...NOW get off the furniture.
THANK YOU!
Have an AMAZING 2009!
-angelo surmelis
Posted by angelo at 8:21 PM

OMG! This is too funny. Your team sounds wonderful and I have to say, they are lucky to work with you.

Happy New Year and keep on making Television. You're amazing at it.

Thank You for all the wonderful hours of Tv you've given me. I was incredibly ill in '08, I am on the road to recovery now, and was bed ridden. I watched you every day. I could find you either on TLC or HGTV. Your smile and laugh would brighten up my day and I would think, Angelo makes me happy. I know that I can still smile so it will be OK. THANK YOU!

Happy New Year to you EVERY YEAR!

You are an incredible man. I have been crushing on your since "Merge" on Lifetime and I am now too far gone to help myself. Happy New Year.

There's a reason why I watch you. Yes, you are an incredibly astute and talented designer. Yes, you are charming and lovely to look at, but the main reason is the fact that you are so generous with others and that you do not take yourself seriously. The work, yes but you always defer to others when clearly it is your vision and talent that makes it all happen. I have worked in this industry for years and I hear things and I know what it is that you do. You are not only an incredible talent you sir, are a gentleman.

The Happiest of New Years.

Happy New year Angelo. You are a gem on HGTV and in the world.

Too funny ( yes poor Dan indeed)!! You are invited to dinner anytime;) Happy New year and many more to come!! Hugs French;)

Ms. French's comment was posted at 3:58 a.m. Do you administer this site yourself? Do you sleep? Ever?

Have a Happy New Year, Angelo. Looking forward to seeing more of your RMS projects in 2009!

All the best,
Michael

Happy New Year Angelo!
Can't wait to see what '09 has in store for you.

I don't sleep much. I was up and approved the comment.

Angelo, I hope that 2009 is even better than '08 and we get more Angelo. Now get some sleep or you won't be able to be on TV as much as we need you to be.

Happy New Year and continue to "go forth & design well." We love your work and your shows. Thank you for the entertainment and the inspiration.

Enjoy the new year and all it will bring. Thank you and your staff for making RMS the show, the best it can be. We love it and you!

May 2009 be filled with all things joyful and wonderful.

Have the happiest new year possible.

The "thank yous" are kind and hilarious. It sounds like you have a great crew. You are lucky to have each other. May 2009 bring even more fun and success.

Continue to inspire in 2009 and BEYOOOOND!

Wishing you all the best for 2009 and always.

Thank you for all your inspiration ad I look forward to learning and seeing more creative goodness.

Thank you for so generously touching all of us with your talent and vision and for encouraging us all to 'go forth and LIVE well' - you're phenomenal.

You rock my world!!!

Keep doing what you do and always know that there will be people out there that don't get it or you, BUT there are a whole LOT of others that do and appreciate what you do BIG TIME!!!!

Sounds like a very cool team of people with the coolest person at the helm.

I am a huge fan of your work.

You've given me and my family hours of visual joy. We've watched you grow as a designer and TV personality since your days on Lifetime & TLC. We couldn't be happier or prouder and wish that 2009 & beyond bring you everything you wish and more than you could ever imagine.

We are thrilled to have gotten to know you and your talent. Every year will only be a better one for you and in turn a better one for us who look to you for creative guidance, encouragement and inspiration.

THANK YOU for brightening up my year.

The HAPPIEST of New Years to you!

Looking forward to what you have in store for us in 2009.

Wishing The BEST Year EVER!

WE LOVE YOU & YOUR SHOWS!