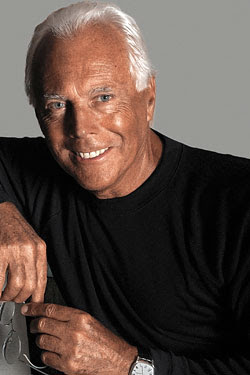 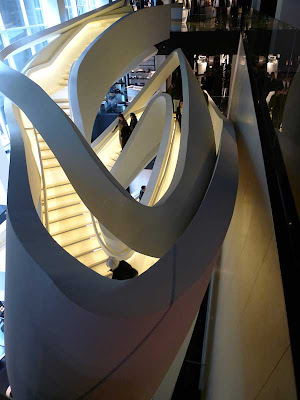 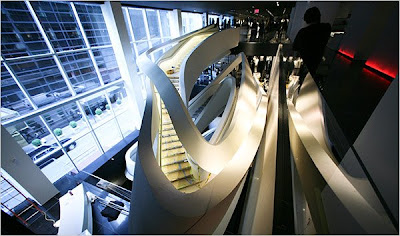 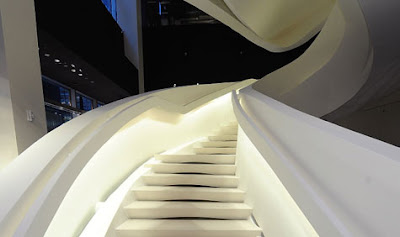 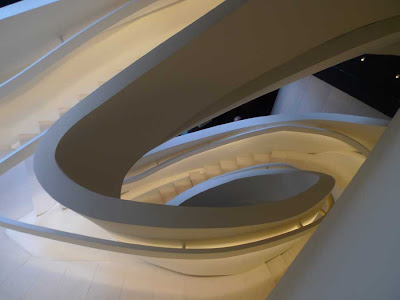 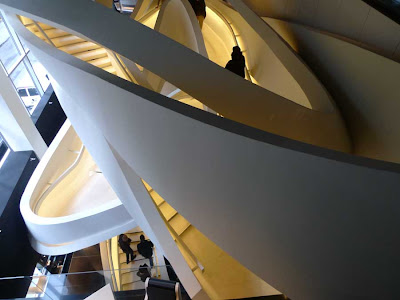 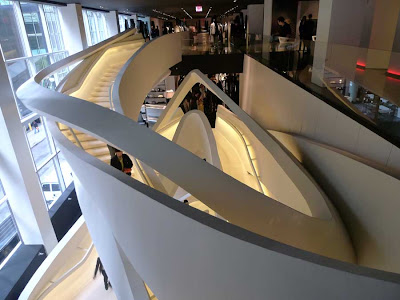 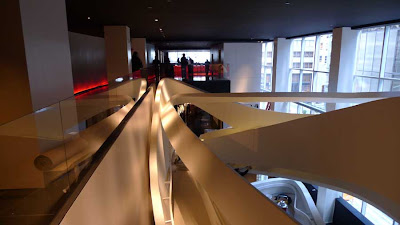 photos: ARMANI, WALLPAPER MAGAZINE, NEW YORK TIMES & E-ARCHITECT.CO.UK
Giorgio Armani opened his new 5th Avenue, NYC store.
The staircase is a ridiculously, incredible feat of engineering and design. The whole building looks like functional art.
Pretty much like his clothing.
I have been a huge fan of his in terms of aesthetic for as long as I can remember. His vision is so pure and focused that whatever gets made, created, & designed follows the same theme. Everything works in unison to create the uttermost perfect Armani world. It can be dizzying for mere mortals like me, but definitely something to be inspired by.
Time for a trip to NYC. I never need an excuse, but I will use this one.
Great article in the New York Times regarding the new store and
Mr. Armani's take on it all.
Check it out here: www.nytimes.com
-AND-
Giorgio Armani's Blog in the NY Times regarding the project: www.themoment.blogs.nytimes.com
Architectural Project:
DORIANA & MASSIMILIANO FUKSAS
Architectural Design Team:
SARA BERNARDI, ALFIO FARO, ANDREA D'ANTRASSI,
CHIARA MARCHIONNI, ROSSELLA MASTRONARDI
Furniture Team:
ANA GUGIC, FARSHID TAVAKOLITHERANI, LUCREZIA RENDACE
Model Making Team:
NICOLA CABIATI, LUCREZIA RENDACE, JAIM TELIAS
3d Model/Render Team:
GIUSEPPE ZACCARIA, JAIM TELIAS, STRATOS CHRISTOFIDELIS,
VALERIO ROMONDIA, GIORGIOS MACHAIRAS
Posted by angelo at 8:56 PM

Why does it remind me of the Nautilus thingies Zaha Hadid has been upto?...Stunning though. My head is going round in circles at the very thought of negotiating the stairs.

Wow for sure. Incredible. The man is as stunning as his clothes, stores. Thank you for this info.

Wowsers!! That is the most confusing staircase I've ever seen..... but SOOOOOOO cool!!!

It is really amazing and seems to soar. I have trouble with modern design. Remember the little book store in You've Got Mail? I loved the cozy charm of it. I think I was born out of time. But it is a cool store.

Stellar, on all accounts!

Love 'Chandan's' comment about navigating the stairs. Remarkable architecture indeed, but honestly I think my biggest concern would be 'how would you keep them clean?' LOL

I also read the New York Times' article. I cannot fathom the cost of such a venture. An estimated thirty-eight million $$$'s for the Tokyo store alone. That's a lot of YENS baby!

Wow is right! And definitely worth the trip to NYC!! Laura


great posting,
all the best.
david

That was a beautiful and down to earth blog by Mr. Armani. I'm sure you can relate to the details, at least it seems that you pay attention to everything you do and it shows. Your work is flawless and I see a store and huge future for you as well, Mr. Surmelis. Bravo.

Armani...fine. I LOVE the glassware in the heading photo (although I am a bit of a fan of glassware in general).

i'm on board the nyc plan.

Ok this give me one more reason to take a trip to NewYork those stairs are unreal.
Peace and Blessings
Cheryl...Snatch JOY!

I am kinda needing an escape did you say you were buying? lol That is incredible and I would love to lay my eyes on it for real!!! French;)

Those are some wicked stairs. Lot's of details too, I can see myself sliding down those stairs from the top to the bottom.

Hi, I just wanted to let you know that your blog is mentioned in this article: http://www.associatedcontent.com/article/1513929/top_10_interior_design_blogs.html?cat=7

The visual movement this staircase creates is mesmorizing - so organic in it's form, too. I love it! I've never been to New York... want to take me with you Angelo?!
Thanks for sharing this fantastic piece of architecture/design.
Victoria @ DesignTies

Thank you for the "heads up" Holly Anne! Pretty cool.

That's it, I'm on my way to NYC right now. I'm only a few hours away by car. This is artwork. I have always been a fan of his clothes and aesthetic.