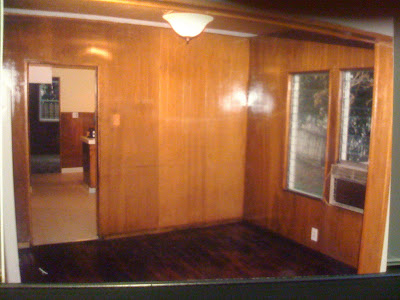 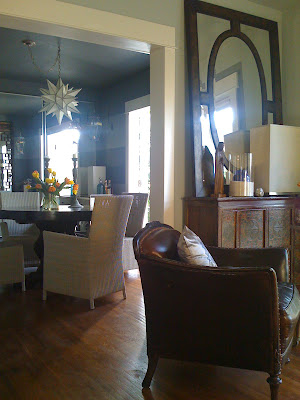 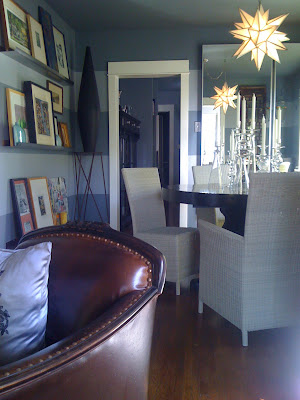 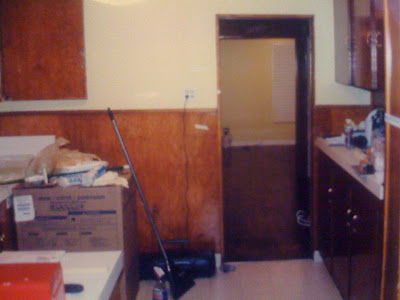 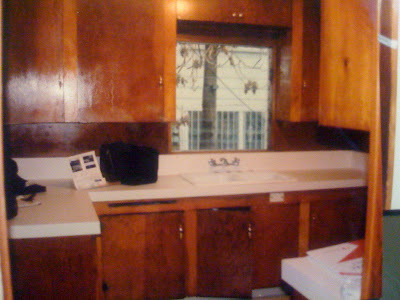 above: kitchen before
below: kitchen after
(kitchen photos courtesy of the l.a. times) 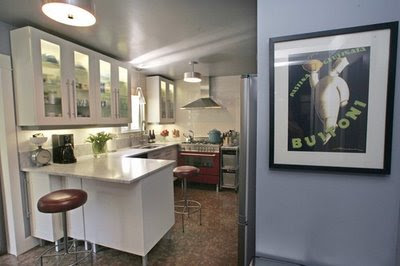 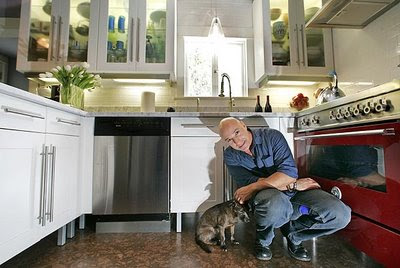 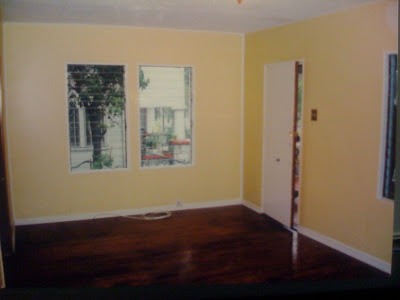 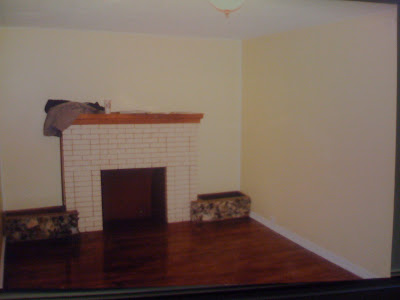 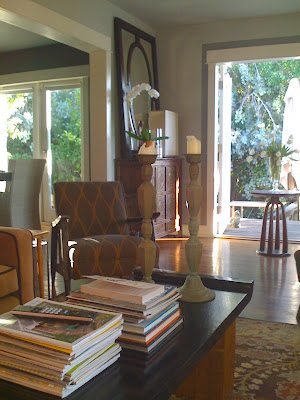 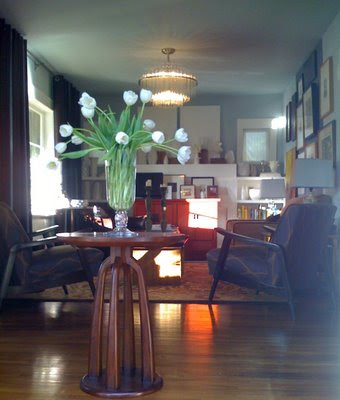 When I wanted to get the house I am living in now, my family and friends did everything in their power to persuade me not do it. Their reasons were all very valid and they became even more so the longer I lived in the house and worked on it.
Living in the house I though was hideous but knowing it could become what I wanted, made me want the renovation to happen at the speed of light. That was not to be. It was a constant struggle and there's still more to do.
For some reason I pressed on and my determination kept moving forward even when the house seemed to just be mocking me:
-Cardboard was used instead of drywall in the master bedroom.
-Two windows in the living room were discovered once I pulled down the incredibly shiny paneling
-The ceilings were also paneled and acoustic tile was stapled and nailed on top of the paneled ceiling in the living room.
Just a few of the fascinating and oh so entertaining stories that can be told now. In the moment, when I would wake at 3 in the morning to rip paneling down with my bare hands because I would not let this house defeat me, I had a couple different stories to tell and they were as unattractive as that shiny paneling.
The yellow you see on the walls in the before pictures in the living room was paneling just painted yellow. There wasn't a surface to be found that didn't have the glory of shiny fake wood on it. It was a signature in this home. Sadly, I did not honor it's history.
-angelo
Posted by angelo at 1:38 PM

It's pretty interesting what you find when you start tearing some thing out.

I vote for both! The results are totally worth the work. Gorgeous! (Is that star pendant light the same one that was used in the opening sequence of Design Star's 1st season?) I feel your pain on the paneling. We have oh-so-lovely 1962 paneling w/ a 1962 rock fireplace and a 1962 wood beamed ceiling in the dining room. Eek!

The cardboard and accoustical tile must have been lovely touches -- not.

It all looks fabulous now, of course. I want me some garlic dip, bread, and wine.

And I'm curious -- did the fireplace morph?

I want to live in your home. WOW! You are a talented man.

YAY! everything looks amazing! You of all people should know the power of great design and the impact that it can have on one's day to day life.

I think all designers (I know I certainly do) experiment in their own homes until things feel perfect.

The colour story of lovely and calming and the mix of furniture styles keeps the energy going in the space.

WOW! WOWZA! It takes more than just an eye for color and decor my friend. It takes vision and definite determination, especially if you take on something like this yourself and you line in it. Bless you and your crazy passion.

Great transformation! Cardboard as drywall? *shudder* Thankfully, you were able to give this house the love and care it needed!

How about determined AND crazy! That's what genious is made of! It is a tremendous undertaking and a tremendous outcome. Standing ovation!!!

Well, I have to agree with ALVN. Determined and CRAZY! Definitely Mad Genius Crazy to see this with what it was. This house is unbelievable now. The fact that you lived in it during this whole remodel just blows my mind. You are an interesting man.

Man, Angelo! This is just fantastic! I'm so glad you went with your heart to make this house your home! I love everything you've done! Your furnishings are to die for! Well, maybe not DIE, but faint for sure! Oh, I love the colors and how everything looks! Your kitchen looks awesome. Is that a Viking range? I'm not jealous, nope, not one bit! ;)
Do you want to come to my house! :)
Be a sweetie,
Shelia ;)

I have said it before, and it bears repeating.........you, sir, have MAD SKILLS!! I would have been OMG, no way-- yet you the artist saw it's true potential.

LOVE LOVE LOVE that kitchen. When will we get a peek at your bedroom and bathroom?? I have never seen either.

Gotta love that paneling! As bad as the shiny foil wallpaper from the 70's that I had to deal with in our first house! You've done a beautiful job Angelo - it looks fantastic!
Kathy (creative_home)

This is gorgeous. Just simply gorgeous.

The house looks so much lighter now. I love the mirror in the dining room bouncing around all that light. That kitchen is amazing. Do we get to see the new fireplace? I know what you mean about the shiny paneling, my old house had that everywhere too. I always wanted to rip it down, but remodeling wasn't in our budget at all. Kids came first. Way to go living through the mess and hard work to get the house just the way you wanted it. Awesome that you didn't listen to the naysayers. I'm a new follower here and on Twitter. Can't wait to see more!

Thank you all for your great comments. It definitely was a labor of love and a bit crazy on my part.

For now, I am keeping the bedroom and bath out of "the public eye" (LOL) for a bit of privacy but that may change soon due to a project that is coming up. WIll keep you posted.

I will have more professional pics to show you all later (including fireplace) that will trump my slightly off iphone photos.

Continue being creative with your own projects and fear not your personal "befores."

I LOVE your home inside and out. You have done a truly beautiful job. Congratulations.

Wowzers! The "before"s are in no way recognizable in the "after"s. Amazing!!

Two questions:
1. How did you see what your home could become when you made your purchase?

seriously folks, that is one sweet transformation.

1) I don't know exactly how I knew, I just did. I have a bit of design turrets. I walk into a space and I can't help designing it in my head. I do it all the time and it drives my friends crazy.

2) I do have TV's (living room, bedroom, office) but they are small and not the main focus of the room

I really could not love this transformation anymore than I do. You DO have mad skills but one of the biggest, baddest, maddest things about you is the way you do stuff. There is no angst or "look at me and how creative I am...so much more than you."

A few designers that are VERY well known come to mind and they do gorgeous work, but the silly 'tude is ridiculous. I would follow you anywhere!

Your home is a masterpiece! What a vision - and SO cool that you made it a reality! Love it that you're doing what you're meant to do - and you are SO GOOD at it. Next time you're in the Quad Cities, bring your hammer and a crowbar, I'll make the cookies!

It's been said and it's worth repeating, WOW! Incredibly vision and work. A-MAZING.

Nice! Love the star pendant, big mirror, etc., etc., appreciate it all more knowing how bad it was before.

So, what was it about this place that made you buy it? Location? Light? History? A poltergeist?

Well I'd say the house put up a good fight (the shiny kitchen cabinets were frightening! :-)), but you definitely WON with your hard work and ooooooh so creative talents! I love the "feel" of all of your rooms...comfy, yet sophisticated, contemporary and eclectic. The rooms exude someone who values and honors the beautiful things in life...natural light, a flower, good books, interesting lines...I'm just in awe!! L~

I love the contrast between the dining chairs and table. What a compliment to the kitchen!

To answer you question Bromeliad, I bought it for an number of reasons:

1) Great price as far as L.A. Real Estate was concerned back in it's "highs."

It's corny, but I always make decisions based on my gut. Luckily, I like to eat a lot and my gut is pretty substantial.

P.S. Did you upload your pics to Rate my Space?! I have to select your kitchen as inspiration. :)

Seriously, I would have stuck my head through the door and told the realtor to do the home-owners a favor and strike a match. AMAZING transformation!

Your dining room is just simply "wow"!!! I love the mirro above the console in the living room. And the kitchen??? Can't believe it's Ikea...looks so high-end (I read the LA Times article.)

I would have seriously run screaming for the hills if I saw this house before. Incredible what you've done and that you even knew that was possible.

OMG are you kidding me! WOW! Seriously WOW! Never would have seen that coming. I too would have run away from that house if I had seen it before. Genius.

You did a pretty fantastic job, I would have been in tears and on my way to a nervous breakdown had I taken on a project like that. I am in love with your stove, by the way.

OMG! Your home is so beautiful. How did you even see this was possible when you first saw this place? Incredible.