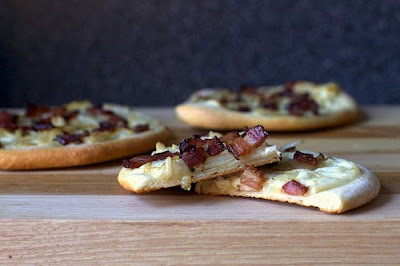 Not much more needs to be said.
Check out the pics and the lovely words that go with them from SMITTEN KITCHEN. Though I had to keep reading the same sentence over and over again since I was distracted by my constant licking of the computer screen. 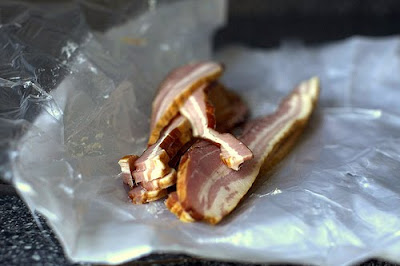 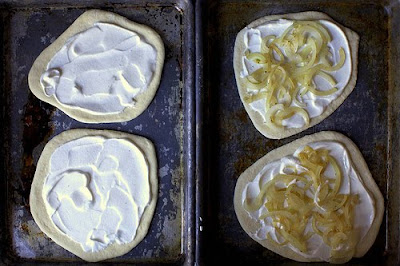 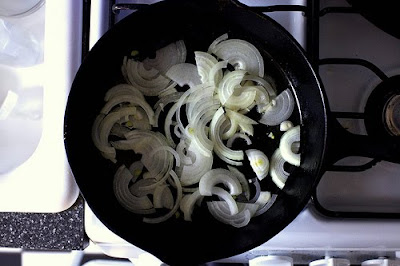 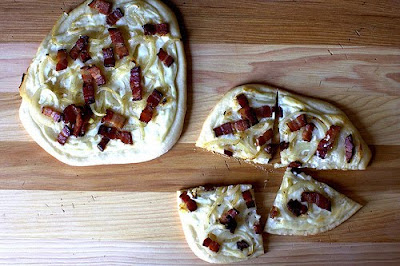 The richness of the creamy cheese against the faint sweetness of the onions, the crunch of the crust and a smoky salty bacon finish is what makes this dish. This dish goes by everything from flammekueche (Alsatian), Flammkuchen (German) to tarte flambée; the flame is in reference to the ovens that would bake it, so hot that it would char the edges of the crust. It is sometimes made with crème fraîche, other times with fromage blanc (which is like quark, or even a fat-free cream cheese) but I liked this version, with both but the suggested swaps of the more accessible ricotta and sour cream. The onions are not always cooked first, but I like them lightly caramelized. It’s often rolled into a square or rectangle, but I can’t be bothered to make pizza into any shape other than round-ish blobs. Um, it’s “rustic”!

As for the pizza dough, if you’ve got a recipe you like or a storebought one that saves you drama, use it. If you want to make a new one, my Really Simple Pizza Dough will yield about a 10-ounce dough, or 2 ounces extra and I will not tell a soul if you make a tiny Nutella-filled dessert calzone with the extra. Pinky swear.

Serves 4 for a light dinner with a salad; can be divided to 8 appetizer portions or 16 tiny party portions

Preheat oven to 450°F. In a medium skillet, cook the bacon over medium heat until the fat is rendered and the bacon crisps up. Remove with a slotted spoon and drain on paper towels. Add onion to skillet and cook until softened and beginning to caramelize, an amount of time I forgot to write down but would estimate at 7 to 10 minutes.

Whisk together (or blend together in a food processor, if you want it silky-smooth) fromage blanc and crème fraîche with flour, then season with salt and freshly ground black pepper.

Divide the dough into 4 pieces. Roll each piece out to a rough 8-inch round, about 1/8 inch thick. If the dough becomes difficult to roll, let it rest for 10 minutes, then continue.

Oil two large baking sheets. Transfer two dough rounds to each. Spread the fromage blanc mixture over the rounds to within 1/4 inch of the edge. Sprinkle with the bacon and onion. Bake on the bottom shelf of the oven for about 12 minutes, or until the crust is golden brown. Cut into wedges and serve.
Enjoy!
-angelo
Posted by angelo at 12:52 PM

You need to develop the laptop version of this:
http://www.youtube.com/watch?v=50GsX72R5HI

You know, in all that spare time you have.