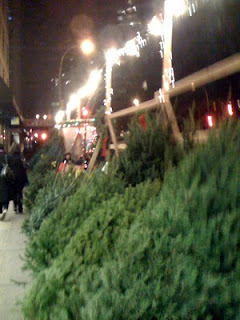 Last year, I bought a little tree for my New York apartment from the bodega around my block. It was so convenient--located directly in front of the market I shop at, I couldn't resist it's piney goodness. The guys working there are also really nice and helpful with everyone and they are happy to give you as many free clippings as you can carry. I can carry a lot. All those years of moving and carrying furniture have given me freaky upper body strength. Mind you, aesthetically it's nothing to look at, but work-horse wise--my upper torso can heave-ho some clippings and stuff. If I ever get into a scuffle with a Blue Spruce (they can be bastards), it's ON.


I decorated my table top tree last year with lights, some new and some vintage ornaments. I took in it's wonder and after enjoying it for about a week, I bid it farewell as I went off to L.A. to celebrate the Holidays with friends. I came back to a John Carpenter movie, starring my tree. Well, probably more of a David Lynch meets John Carpenter kind of film. My beautiful and noble, Noble Fir had rigor mortis. The branches and needles were so dry and stiff, that trying to remove the ornaments and lights was like being repeatedly poked by a sewing needle. The color of the tree was a pale, sickly ashen grey. It didn't look sad, it looked dead. The kind of dead that isn't fresh. Then there was the stench. The once clean and subtle scent of pine that filled my studio was now replaced with the stench of, well---death. How did the super not break into my apartment to see if I had died? OK, that was for dramatic effect, he has keys and would merely unlock the door and walk right it. No breaking in would occur, but seriously?! How? Did the smell not permeate the building? Were the residents not concerned? Every time someone brews a pot of tea I can tell you not only what it is, but where the tea leaves were harvested from. No odor goes unnoticed. That is one of the perks (luckily I live in a bldg. that seem to be filled with great cooks) of living in an old, pre-war apartment building. Nothing is air tight. Yet, my dead tree created no hubbub.

I vowed that if I was not going to spend Christmas Day in New York City this year, I would not get a tree. So, as the holiday bodegas were setting up in the city and all the beautiful and fragrant trees were being stocked, I stood firm. It was hard. I really wanted a fresh little tree. Also, these New Yorkers were taunting me. Carrying trees on their shoulders. Making joyous holiday small talk with the vendors, who untied trees to show how they would look in full bloom. C'mon people. You're killing me. Stay strong, angelo. 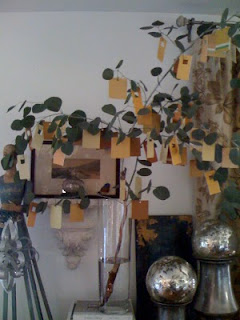 I was going to get a Christmas Branch! I had done one last year, back in L.A. Not only did I have the luxury of a Christmas tree, I plucked a eucalyptus branch from the yard, hung some paint chips and made myself a little DIY table topper.
Well, easier said than done. In L.A. I would just cut one from my back yard. In New York, they frown upon clipping one from the trees in Central Park. Whatever. So, I went to the flower market looking for my branch. Well, apparently I wasn't the only one with this idea. The prices were outrageous. IT'S. A. BRANCH. PEOPLE. The best price was $47 and since it was appox 35 blocks from my apartment, it was another $15 to get it delivered. What the what?! No. I will not participate in this, kind sir with the hipster moustache/beard combo. I will not. Though I am quite envious of the full growth and zero patchiness of said moustache/beard combo. I carry on. 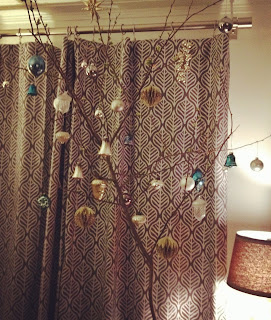 Last night as I contemplated the artificial table top tree scenario and saw a few that were quite nice, I decided that it was not meant to be. I'd be leaving for L.A. in appox a week and I would get my fresh tree fix there. I wanted to come back to some sort of holidayness here in New York, since I'm coming back for New Year's Eve, but I have a dried magnolia wreath hanging on a floor mirror and it's doing the trick. Then it happened. Three blocks from my house, a flower shop that I sometimes visit, was closing and bringing in all their buckets of flowers and topiaries from outside into the store.


As I observed this task while walking past the store, in the window I spotted a large, black plastic bin filled with branches. I was cool and nonchalant as I entered, "We're closing, what do you want?" grumped a large, old, hunched over man with patchy stubble. This is the kind of hipster that resides in my neighborhood. "Are you selling these branches?" I said mustering an air of boredom, not to seem to eager. "Ten bucks. Pick the one you want. I'm not delivering this shit." Wiser words I had not heard all day.

And that, boys and girls is how the Christmas Branch (above left) came to be.

Happy Holidays, Kids.
-angelo
Posted by angelo at 2:58 AM

I have to say, that is a Christmas story that had it all. Love the suspense all the way to the end! Loved it! I have a very sentimental artificial tree...but I have given it a natural dressing some years. I am surrounded by woods here in NW Jersey. I take spent and dried Golden Rod flowers, spray them with fixative and place the heads on the outer branches. This year I have a ton of dried Hydrangea...thought I'd give them second life. (BTW, on my bucket list - NYE in Time's Square just once because it's my Birthday!)

As a former New Yorker, I really loved this story.
Have a wonderful Christmas!
xo xo

GREAT story ;D
I'm so glad you got your branch!

What a nice story...good to know there is still heartfelt NY cheer to be had! :-) The branch is lovely - a perfect decoration when one isn't around to maintain a tree!

Never the less, I am just popping in to wish you and those who are close to your heart, A VERY MERRY CHRISTMAS! Stay safe and keep well. Many hugs
-Brenda- aka 'mrsben'
P.S: Loved your story!!!!!!!

Brenda-
Thank You! Have a VERY wonderful Christmas and a spectacular New Year! It's been very busy (for Tom as well) and the time to blog has not been carved out, unfortunately. Hopefully that can be remedied in 2012. Best, Angelo